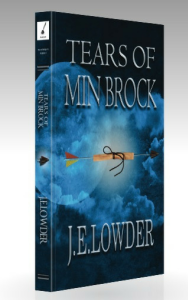 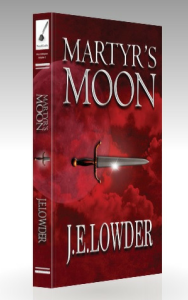 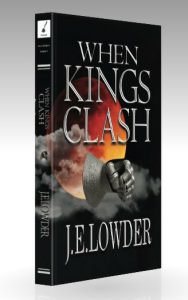 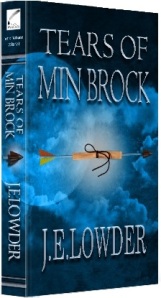 Well, I didn’t have time to get this posted this morning. Here is the continuation of Chapter 1 of Tears of Min Brock…

If not a raid, she wondered with a sigh of relief, perhaps it was my father downstairs.

Quinn often drank wildeberry wine well into the night, and in his inebriated state, sometimes hurled objects across the room followed by his curses.

This time, the sound came from outside. Gathering her courage, she peered through a crack in her shuttered window.

Lances of silver-blue moonbeams crisscrossed Hetherlinn while the trees strained against the windstorm and hindered her vision. Suddenly, the trees mysteriously parted, as if sensing her need for an unencumbered view.

Floating above the communal fire was a warrior and his mount that glowed like the moon. He turned and looked at her cottage, number seventeen. Elabea gasped and retreated into the shadows.

Did he see me?

Fearing the worst, she pulled her quilt close and sat perfectly still, hoping the ghost-like warrior would soon be on his way. She tried not to worry, but worry she did.

He’s definitely not an Ebonite. So where’s he from?

She fretted, straining to hear any more sounds, wondering most of all…

Why is he here?

Finally, she found an answer that made her eyes bulge with fear.

He must be a monster from the Cauldron!

Flashbacks from her countless trips to the oak with her friend, Galadin, began to fill her with panic. The Oracles, she gasped. He’s come to punish us for climbing the oak!

As quickly as that notion lit her anxiety on fire, another thought, one that involved reason, cooled her like water. We’ve played in the oak since we were five summers of age. Surely we would have been caught before now.

She relaxed somewhat, but was still frightened by the creature looming beyond her cottage. She tried to push his image out of her thoughts, but her will was not up to the task. In fact, the harder she strained, the more engraved his face became.

And what a face! Like dancing fire in a wintry sky!

Her curiosity, a trait she was noted for, joined her inner fray, and soon, her fears were overruled by a desire to take another peek.